RSMSSB will keep a written examination for the position of Rajasthan Area Development Officer. According to the announcement, the department will hold the written test in the month of December.

The RSMSSB VDO Admit Card for this test will be available for download 15 days before the exam. At that time, candidates can obtain their RSMSSB Call Letter from the department's web portal. 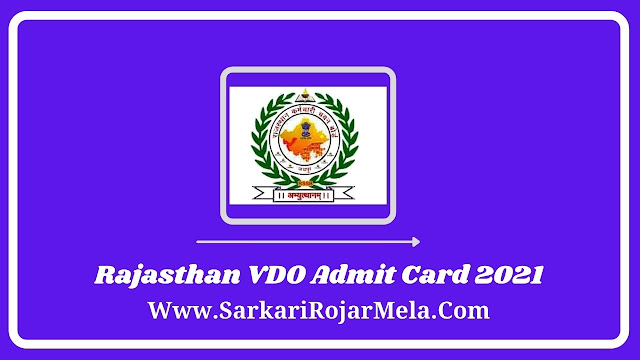 In the month of October, the application procedure for VDO Recruitment was successfully completed. The department is now preparing for the next stage of the recruiting process, which is the written test. The written test will be conducted in two stages: preliminary exam and main exam.

A total of 3896 Village Development Officer positions are available, with 3222 designated for non-scheduled regions and 674 earmarked for scheduled areas. Candidates will be finalised for the discussed positions based on the various stages of the selection process.

✔Selection Criteria for Rajasthan VDO
The Rajasthan VDO Paper 2021 will be conducted in two stages by the RSMSSB:
Candidates who have been shortlisted in the preliminary test will be invited to take the Mains Exam. The shortlisted candidate's Mains exam strength will be based on 15x the total number of positions indicated in the advertising. Those who pass the Mains test will be invited to the Final Interview, from which the Rajasthan VDO Final Merit List will be compiled.
Note: RSMSSB maintains the right to change the dates if necessary.
✔RSMSSB VDO Salary According to the Rajasthan state government's 7th Pay Commission, Rajasthan Village Development Officers would be eligible for Pay Matrix Level 6. This results in a predetermined amount of pay being given for the Rajasthan VDO application.
✔How to Download Rajasthan VDO Call Letter 2021
The RSMSSB VDO Admit Card is yet to be released. Before two weeks before the test, the selection board will provide the RSMSSB Admit Card on its official website. Candidates may get their RSMSSB VDO hall ticket online by following the guidelines on this page.